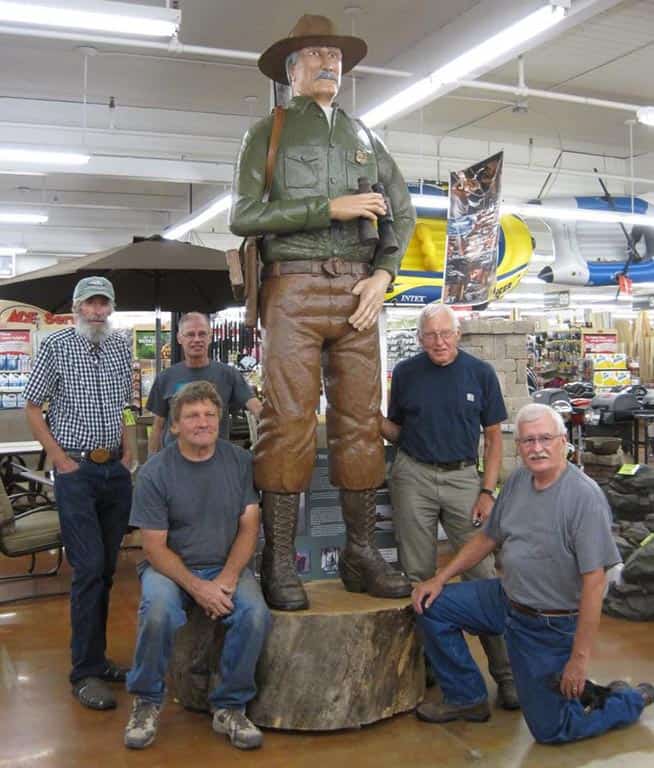 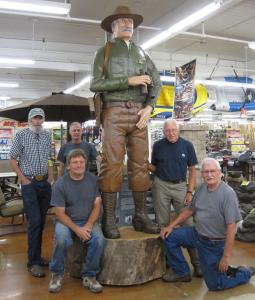 “As one of the craftsmen for the Ranger, I’m glad to have his tour start here at Montana Ace-Trempers. Our group has been carving together since 1991, and we are proud to make this meaningful contribution to the Museum and the Missoula community,” said Steve Weiler, Store Manager, Ace Hardware.

The Forest Ranger wood carving was created by volunteers Phil Bain, Steve Weiler, Jerry Covault, Chuck Kaparich, and Alex McDonald. The group’s past carving work includes Missoula’s Caras Park carousel horses. Inspired by a 1909 Forest Service photograph of rangers on fire patrol, the carvers brought to life a Ranger standing 10 feet tall and weighing over 600 pounds. The Ranger is carved from basswood, the badge from myrtle wood and the belt buckle from walnut. No electric tools were used in the carving, which took three years to complete.

“Our first question was, ‘What does a Ranger look like?’ So we used a photograph from the Museum’s collection. Ranger Griffin worked on the Thompson Falls Ranger District in Lolo National Forest around 1909, and this image of him on patrol really fit the bill. I carved the buckle from a branch of walnut that was growing here in Missoula. For me, it represents my own time working at the Forest Service Remount Station and Ninemile Ranger Station,” said Jerry Covault.

For more than a century U.S. Forest Service rangers, engineers, scientists, families and partners have worked to improve our daily lives. Through our collections of artifacts, images and documents, the National Museum of Forest Service History supports education, research, and understanding of how forest conservation benefits all Americans.

”We asked this talented group of craftsmen to carve the Ranger in 2008. They brought us a model a few months later, and carving started in the spring of 2010. We couldn’t be happier with how it turned out. This Forest Ranger honors the legacy of generations of Forest Service employees. He even has a time capsule tucked away inside – for future generations to discover one day,” said Dave Stack, Executive Director, National Museum of Forest Service History.