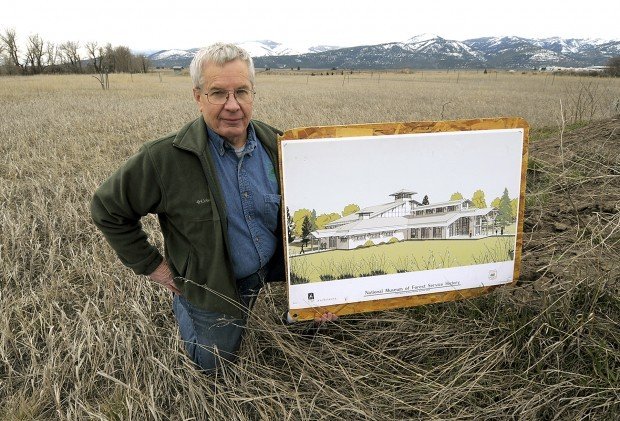 If you ask Dave Stack, the old wedding dress stitched from a silk parachute may be the oddest artifact held by the National Museum of Forest Service History. 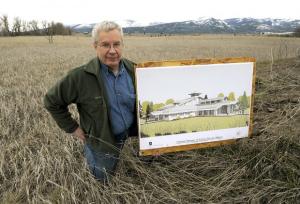 Executive Director Dave Stack stands on the future site of the museum.

Once worn by a proud Rocky Mountain bride, the item is one of 33,000 collected by a nonprofit group three years shy of turning 30 years old.

With their eye on the future, backers of the proposed museum are working to raise $14.5 million to construct a 30,000-square-foot facility on 36 acres of land held by the U.S. Forest Service near the Aerial Fire Depot and Smokejumper Center on Airport Road.

Those behind the effort remain optimistic in their endeavor.

“We’ve raised $3.8 million so far,” said Stack, vice president and executive director of the National Museum of Forest Service History. “Our board members come from around the country, and we’re fundraising around the country.”

On Tuesday, Stack gave Missoula County commissioners a preview of the proposed project, which remains years in the making. The nonprofit was formed in 1988 by a group of citizens looking to repurpose the old Fox Theater in downtown Missoula.

While the theater was eventually razed, the group came to certain realizations. The Forest Service had no clearinghouse of history, and so they embarked on a quest to create a national repository in the agency’s honor.

They’ve already won the support of the Forest Service, which has contributed $500,000 toward the effort. Other top donors to date include the BNSF Foundation, the Boone and Crocket Club and the National Wild Turkey Federation.

“We want this to be a Smithsonian affiliate, so it’ll be very high quality,” Stack said, “We believe it’ll attract 50,000 people a year, which we think will be a contribution to the tourism economy of the county and this city.”

Stack said Missoula is a fitting place to create a national-caliber museum dedicated to the history of the Forest Service.

The city is home to the agency’s Fire Sciences Laboratory, the Smokejumper Center and the Rocky Mountain Research Station. The University of Montana’s forestry program remains one of the oldest in the country.

“A lot of the early history of the Forest Service was in Missoula, or around the Missoula area,” Stack said. “It’s appropriate that this national facility should be located in Missoula.”

As proposed, the museum would demonstrate the innovations of wooden technology over the years by incorporating timber posts sourced from Florida to Alaska. It would also include red oak and black walnut harvested from the agency’s Fernow Experimental Forest in West Virginia.

Supporters have raised nearly $4 million to date and spent roughly $1 million to bring city sewer and water to the location. The museum’s board is now searching for major donors.

“We have a large number of artifacts and we have people interested in doing research in our repository,” said Stack. “We have traveling exhibits, and we’re already doing a lot of the things that an operating museum does.”

Past traveling exhibits have included the history of Forest Service communications equipment and the Madison River canyon earthquake of 1959, which altered the face of the Gallatin National Forest.

Artifacts held by the museum also include a 1921 K&E Abney level with compass, and a backpack pump, circa 1950. More than 33,000 items are held in the collection.

“We have a small group of people here that are real dedicated and there’s a lot of energy going into this,” Stack said.